In 1934, Captain Milo Beechgood Welch originated the Soo Locks sightseeing boat tours in Sault Ste. Marie, Michigan. He was a visionary that sacrificed everything to make his dream a reality. As a seasoned tug boat captain, Milo Welch was employed by the Great Lakes Towing Company and always noticed that the Soo Locks had an attraction with visitors. People were simply intrigued by the ships locking through the world’s largest locking system. At that time, the only passengers that went through the Locks were aboard palatial passenger steamships or shipping company guests riding on the large lake freighters. 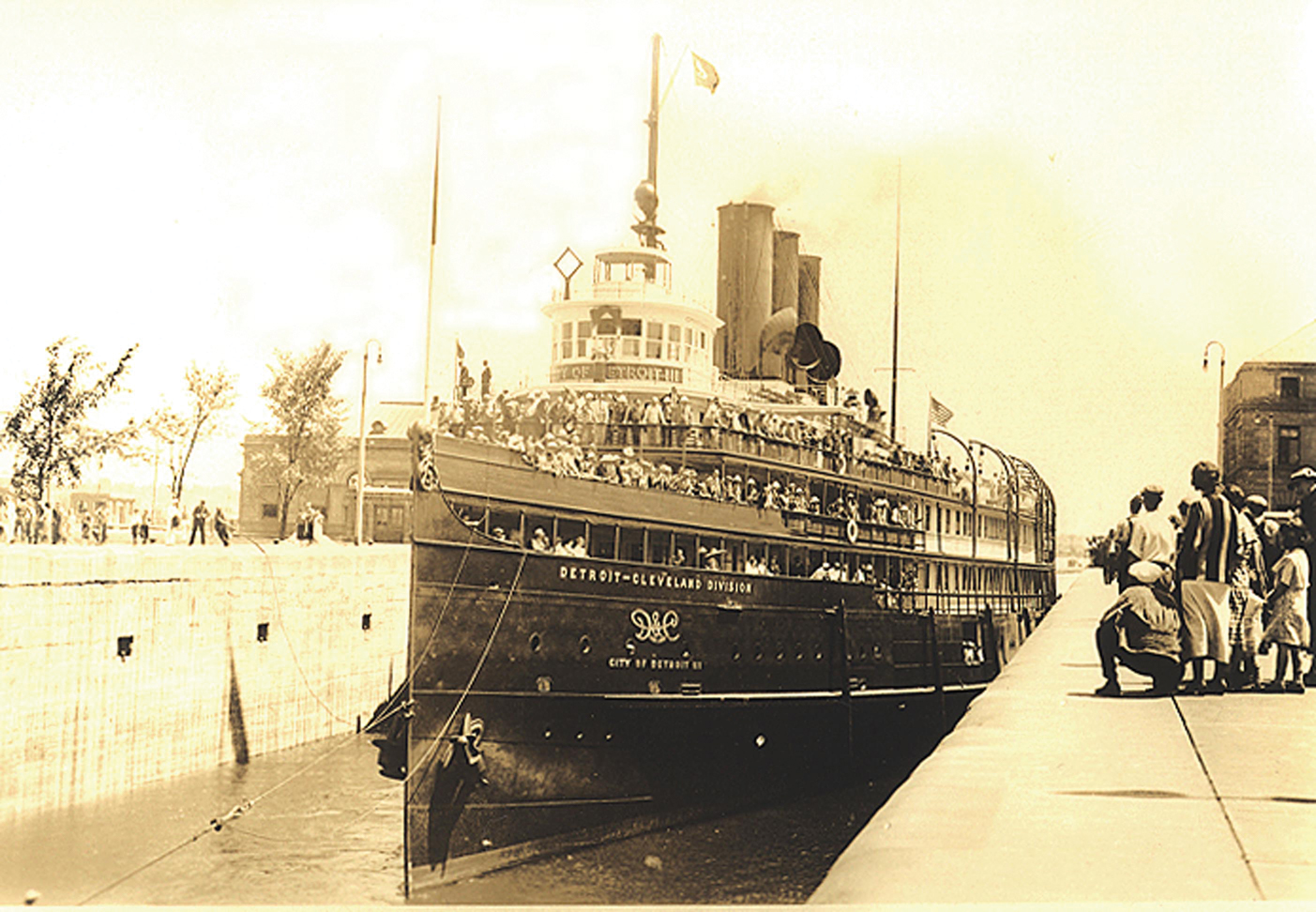 Captain Welch believed that the only way to truly experience the Soo Locks was by boat. He believed that all visitors to Sault Ste. Marie deserved the opportunity to experience the Soo Locks by riding through them. Financing such a dream would be difficult, as the local banks thought the idea was doomed to certain failure. They reasoned that people were satisfied seeing the locks from the lock wall. 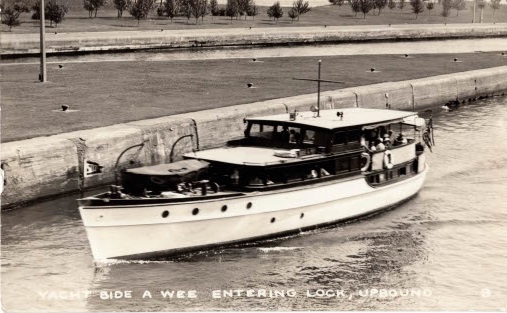 In the spring of 1934, Milo’s wife sold their house, and a local businessman who owned a drug store loaned Captain Welch some additional funds to make his dream a reality. Captain Welch then purchased a gas-powered wooden yacht named the Bide-A-Wee from a Scottish gentlemen who lived near Detroit. The yacht was 68 feet’ and 16′ wide. It was licensed to carry 60 passengers. Captain Milo Welch also purchased property owned by Great Lakes Dredge and Dock to serve as a base of operations. This is the current location of Original Soo Locks Boat Tours Dock 1 today. During the initial years of the Soo Locks boat tour company, Welch continued to work for Great Lakes Towing Company to support his new business venture. 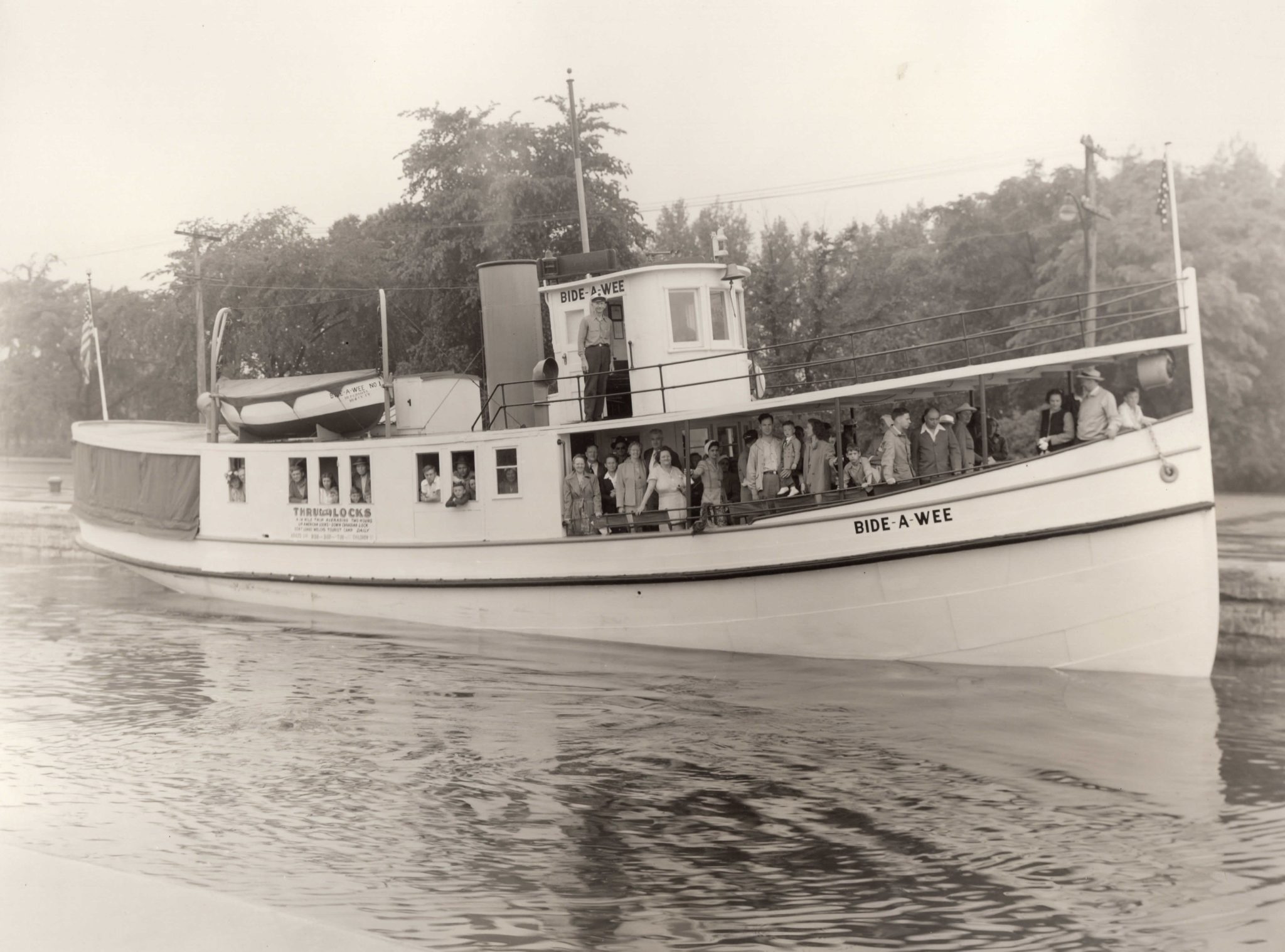 In 1938 the first Bide-A-Wee was sold and replaced with the second tour boat named Bide-A-Wee. The second Bide-A-Wee was actually a converted fish tug named the Pittsburg. It was 70′ long and 16′ wide, and had a passenger capacity of 92. In the fall of 1941, the steam engine and boiler were removed and replaced with a diesel engine. With the outbreak of World War II, tourism came to a halt in the area. The U.S. Army deployed over 10,000 troops to the Soo to guard the area 24 hours a day and barrage balloons filled the skies over Sault Ste. Marie. Only essential shipping was allowed to pass through the Soo Locks. The lock tour boat Bide-A-Wee remained tied to the dock from 1942 to 1945. In 1946, with peace in hand, the tour boat resumed normal operations.

One year later, in 1947, another boat began operating tours through the Soo Locks. The competing operation was established by a local Sault Ste. Marie attorney, F. Ray Gillesbie and Whiz MacNaughton. The name of their boat was the Messenger. In 1948 these independent companies formed a partnership known as American and Canadian Lock Tour

In 1955 the third Bide-A-Wee was constructed and purchased from Blount Marine Corporation of Warren, Rhode Island. This all steel 65′ long passenger boat was 25′ wide and could carry 272 passengers. It was powered by a single 6-110 GM Detroit diesel engine. The third Bide-A-Wee and her sister-ships Holiday (1957) and Hiawatha (1959) all made the long trek from Rhode Island up the Hudson River, through the Erie Canal, and across the Great Lakes on their journey to Sault Ste. Marie, Michigan. The clearance under the bridges in the Erie Canal was so tight that the pilot houses of the tour boats were cut in half in order to pass under the bridges. The pilot houses were reassembled after transiting through the Canal. During this time period, Milo Welch’s sons, Captain Donald E. Welch and Clinton Welch were involved in the boat tour business. Donald Welch had served in the U.S. Coast Guard aboard the 160′ buoy tender Hawthorne and the 327′ long Cutter Campbell during the Korean War period and obtained his captain’s license.

The second Bide-A-Wee was sold to the American Bridge Company. She was renamed the Bridgebuilder X and used to carry workers and supplies during the initial construction of the Mackinac Bridge. In 1958 the Bridgebuilder X was sold to the Nickerson Company, a family operation owned by Sterling Nickerson, Jr. The vessel found a new use hauling pulpwood and lumber. The business was doing well until December 15, 1959 when the Bridgebuilder X left the Roen Shipyard in Sturgeon Bay, Wisconsin for South Fox Island across Lake Michigan. Sterling Nickerson and a relative Glen Roop were aboard the vessel as it ventured out onto Lake Michigan. She would be caught in a gale with heavy seas and would never be seen again.

For 87 years, since 1934, the traveling public have enjoyed exciting Great Lakes Maritime Adventures with the Original Soo Locks Boat Tours in Sault Ste. Marie, Michigan. Over its long duration a MISSION STATEMENT for the Company was developed to reflect its long history, core beliefs, dedication, and commitment to providing a superior maritime experience.

By the grace of God, we are a dedicated crew providing our customers a Great Maritime Adventure

Established in 1668, Sault Ste. Marie is the third oldest continuous settlement in the United States. Before being a European settlement, the area was inhabited by North American Indians for almost 2,000 years. On the shore of the St. Mary’s River the native community, Bahweting – “The Gathering Place” – was quickly established as an important fishing and meeting place.

The first European settlement was established by early French fur traders. Known to them as Sault du Gastogne, it was changed in 1668 by the Jesuit missionary Jacques Marquette to Sault Ste. Marie, in honor of the Virgin Mary. There is debate about what the name translated to, but French speakers say “Sault” means “to jump”, making Sault Ste. Marie the place where people would come to “jump the St. Mary’s.”

In the mid 1700s the French and British often fought over the area. In most cases the fights were about British trade with the Indians. Both of these countries flew their respective flags. In 1820, the Treaty of the Sault turned control of the area over to the United States. America, concerned about a Canadian invasion, built Fort Brady on the site of the old French fort. In the 1890s Fort Brady was abandoned for the second time and moved to Mr. Ryan’s Hill, the sight that is famous today for being the home of the Lake Superior State University.

The St. Mary’s River is the only water connection between Lake Superior and the Great Lakes. However, there is a section of the river known as the St. Mary’s Rapids where the water falls about 21′ from the level of Lake Superior to the level of the lower lakes. The natural barrier made it necessary for the construction of the Sault Locks, a project known as the St. Mary’s Falls Canal. The first lock was built in 1797, on the Canadian side, but was destroyed in the War of 1812.

The United States built its first lock in 1855. Today there are two U.S. locks in use, and one Canadian Lock. The Soo Locks are an engineering marvel that attracts thousands of visitors every year. Great Lakes freighters from the U.S. and Canada, as well as ships from around the world transit through the Soo Locks carrying an array of cargos. We invite you to “Come and Ride Through the Soo Locks with Us!” We are the ORIGINAL SOO LOCKS BOAT TOURS. Our large dock facility is located at 1157 East Portage Ave. in Sault Ste. Marie, Michigan.